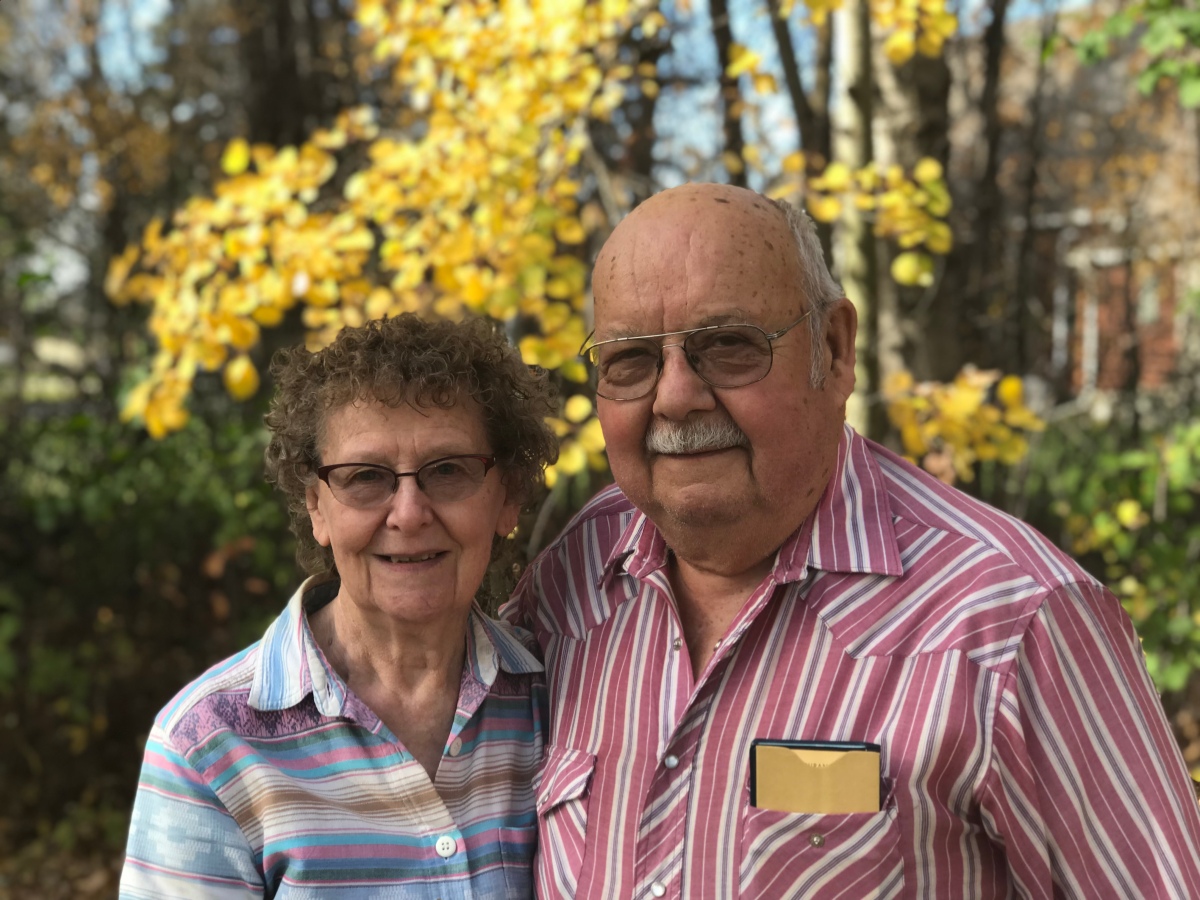 Before all that, they cross-country skied the snowy fields on the outskirts of Warroad while their parents visited over coffee. They played as kids do, tracking the snow, sliding the haystacks, coming back into the house wet and red-cheeked in their childhood joy.

As they grew, they could both be found at a weekly practice for their church choir, and it was there that the shift beyond friendship occurred. “One evening he asked if he could maybe take me home from choir practice,” Joyce recounted, when asked how they met.

So they happily settled for a simple courtship of church meetings, school functions and family friendship. When Melvin left for college – he graduated high-school two years before Joyce – they kept in touch by writing letters. “I had to let her know I was still here!” he laughed.

On Joyce’s graduation day, Melvin gave her a diamond. As she told the story, she caressed it with the fingers of her right hand, as she’s surely done a thousand times over the years since.

Their engagement was filled with more letter-writing. “Joyce got cancer while we were engaged,” Melvin said. “she was in the cancer hospital in Corning, Arkansas and Atlanta, Georgia. I was working at Standard Oil.”

Now a survivor, Joyce came home and they were married in 1955 surrounded by friends and family at a hometown wedding. Their first son, Dwight, was born in 1957 and then Annette, a full-term stillborn baby girl in 1961. Two additional sons arrived after Annette’s loss, David and then finally Robert, who was home from the hospital before Melvin could get back from his traveling. “I just drove myself,” Joyce said, matter-of-factly.

Melvin had gone to work at Marvin Windows shortly after they were married, and with the support of George Marvin, who promised that a job would be waiting when he returned, Melvin was also able to return to Grace College of the Bible in Omaha Nebraska.

Their courtship and engagement had been marked by stints of separation and their marriage was no different. Once home from college and back to work at Marvin’s, Melvin was on the road five days a week. He was in sales and on the convention show circuit. “My territory was everything west of Warroad,” he said emphatically.

It meant that Joyce kept everything going in his absence. Parenting solo over 70% of the time, she found support in both the Ortmann’s and her Unruh family. “My dad especially,” Joyce said, “he just loved those grandsons. He’d get them out there on the farm working beside him. They of course wanted to drive the tractors and the trucks well before they were even tall enough to see over the steering wheel.”

Melvin’s responsibilities continued to expand at work as the company grew, but each summer they’d make family time a priority. “Joyce and the kids would stay at a campground in the area where I was working for the week,” Melvin said. “So I’d go off and make my business calls and then come back to them at night.”  As a young family, they also used to take a full two-weeks off to boat up to Oak Island Resort on Lake of the Woods.

When asked about their adventures together, one such trip was instantly top of mind. They were out fishing and got caught in a summer storm so they decided to take refuge on a small island, Joyce explained.

“And just like that, we got hit by lightening!

“I felt this jolt go down my leg like I had grabbed ahold of an electric wire. I was dazed, and when I looked up I saw my whole family laid out.” David was also dazed but stood up fairly quickly. Their eldest, Dwight, seemed to have lost some short-term memory, he couldn’t remember where they were or why. Melvin had gotten partially knocked out and ended up having burns on his ear and the back of his eye. The littlest, Robert, was completely unconscious.

In a stroke of fortuitous luck, Joyce had recently been trained in emergency procedures and CPR as part of the Warroad ambulance crew. She quickly gave instructions to her boys to see to Melvin while she worked on little Robert. “It didn’t look like he was even alive,” Joyce said. Nerve-wracking though it was to be so quickly thrown into a real-life situation, she remembered her training. “I felt for his pulse and his respiration, and I started doing CPR. Of course, he’s a small child and you don’t want to push too hard. All of this is going through my mind, but after a few ventilations and pushing on his chest, all of sudden he took a real deep breath and started crying.”

Joyce kept rubbing and lightly stimulating the child to get his small body and heart fully firing again. When the shell-shocked family made their way back to Oak Island Resort, a visiting doctor confirmed it was lightning strike. Months later at her continuing ambulance training, Joyce told her instructor the story and he gravely assured her that she had done the right thing. Robert’s heart would have slowed and then stopped altogether if she hadn’t had been there to resuscitate him.

The close call, their ongoing family closeness, and the continued physical separation as Marvin began traveling further away to Canada, Mexico, the Northwest Territories, Europe and Asia taught them not to take anything for granted.

“And there wasn’t really anything to argue about in the first place,” Joyce added. “I was alone with the boys a lot and had to do the disciplining as they got older, but Melvin always backed me up on how I parented when he came home.”

It was that simple. They had been on the same team since the beginning, since the wet stockings and red-faces of childhood. There were no differences they could think of, other than Melvin being male and Joyce being female, which had them laughing hilariously.

These days – now that Melvin is retired from Marvin’s, done with a stint hauling patients for Senior Medical Travel, done with 12 years serving on REA’s Board of Directors and after a short time working for the Moranville Township and their church board over the years  – now, they just like to be together.

Joyce, at 81, still loves to bake, sew and quilt, though her glaucoma is making the latter two more difficult. Her lifelong love, playing the piano, is still ever-present; she goes over to the church to play piano or organ now and again, and she also plays every Tuesday at the Care Center. She credits her faith as the greatest factor in getting her through the years, the trials and the joys.

Two years her senior, Melvin would still like to go elk hunting someday. He’s regained his health after quintuple-bypass heart surgery a while back, and his record breaking Manitoba black bear is on display at Streiff’s Sporting Goods, for anyone who may question the 83-year-old’s hunting prowess. “At this point in my life, I can afford to hire a guide and someone to do all the heavy lifting,” he chuckled. “It’s one of the perks of having worked so hard all those years. I was a good provider and I was paid well. But I did work very hard.”

The couple have become snow birds in the last five years, just recently buying their own place in Arizona to spend the coldest months. It’s close to their eldest, Dwight, and gives them an extra chance to see a few of their grandkids, even though they’re all grown and working on families of their own. A flight across country to Atlanta, GA will bring them to middle son David and his growing family, and then back closer to their Minnesota home in Wisconsin, where they get to see Robert and all of his.

In a sense, Melvin is still on the road after all these years, but now, at least, Joyce is finally by his side.

“I think I’ll keep him,” she laughed as she playfully slapped his knee. Their sense of shared humor has also been key to their connection, they said. “And you have to live each day as if it’s your last,” Melvin added.

It’s the simple things that matter to them both, like the downsized and simplified life now that they’ve just recently left a house in the country for a two-bedroom apartment in Warroad, their close friends, their faith, the joy of seeing their grandkids and above all, just being together, finally, every day.

Together at last, to the last, makes each day a milestone worth celebrating for the Ortmann’s.

(Published in the October 24th issue of the Warroad Pioneer)

A writer, woods-wanderer, and internal peace seeker who raises two free-range children in the wilderness, I escaped the wasteland of corporate America a few years back never to return. I write about love, family, mental health, addiction, parenthood and personal growth all through lens of place and connection to the land. Most entries are my weekly column for our local small-town newspaper, and there's an occasional feature story thrown in the mix as well. View all posts by Angle Full of Grace